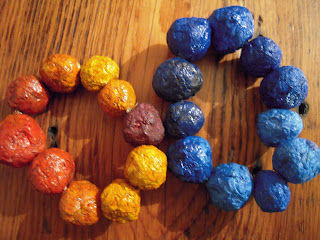 Just a little something I've been working on through the holidays. Kinda funky, but it's my first try at jewelry and I'm not gonna be too tough on myself. This is a craft many people have gone very far with, in fact, the craft dates back to China in the beginning of the 2nd century A.D with the invention of paper itself. A couple hundred years later it was brought to the Persians thanks to some Chinese prisoners who taught the craft to the locals. Then the Europeans caught on. Word has it, french peasants would buy paper waste from bookbinders and publishers and process it by chewing it. Hence the name papier mache meaning "chewed-up paper". There are so many examples of great papier mache in all its forms.  I just found artist Nancy Winn through google....and she makes some incredible animal art out of recycled materials.

But, enough of those accomplished artists. :-) Back to me. 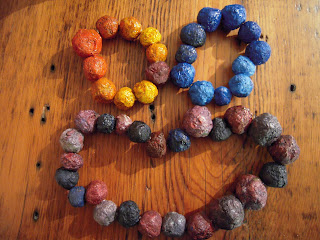 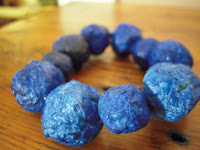 After all that paper, I just had to get my hands on some wool. So, I used some of those beads I made a few weeks ago and turned them into a bracelet. 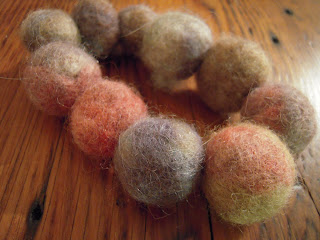 When it comes to wool, I just can't help myself. I'd have to say my favorite texture was the felt, but the colors of the papier mache were so vibrant. And, you don't actually need to chew the paper to make it (I thought about not including that note in this post, but my conscience got the better of me). Just take some paper (printer paper, newspaper, etc....avoid construction paper though, it doesn't break down well) and boil it all while stirring until it starts to break down. Drain the water. Add some Elmers glue until it makes a nice paste. Then, go crazy!!!! You can free hand it or you could sculpt over a frame. Make a mask. Make jewelry. Make Animals. Most importantly, Make Memories. Just thought I'd toss a little extra sappy in there. Don't forget to let it dry all the way through (could be a few days depending on size), and then decorate it!! I sprayed my beads with a clear enamel to make them last. The question is.... do I really want them to?? I'm thinking I do. They are just about as close to "bling" as I can get. I'm sad to say, I had to google "bling" to make sure I was using the term correctly. We don't hear much of that fancified city-talk out here in the back woods.