It's All the Same to the Clam Shell Dish 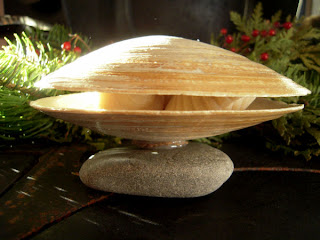 The day after Christmas my family and I went to visit a Great Grandmother who lives about an hour and half away. On the return ride we stopped at a popular beach, now deserted because of the snow and cold. We played in the the sand, the snow, and we carefully avoided the water. :-) The Maine ocean is chilly enough in the summer time!! While we were goofing upon the beach, I happened upon some lovely whole quahog shells with hinges attached.
I thought to myself, that little hinge attachment they have is so awesome....but, what if it were a real hinge?? Then I could put decorative soap in the shell and that would be that. There. A quahogs life ambition fulfilled. :-) 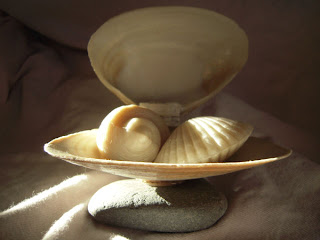 Would you like to bring some happiness to a clam? Of *course* you would. To do this you need:
Whole clam shell
Hot glue
Hinge
Rock
Burlap
Mod Podge (Glossy)
~First, clean that clam shell. You won't want it in the house if you haven't. Those suckers can really hold their stink. :-) Put it through a hot wash in the dishwasher and give it a little extra scrub afterwards to get any extra stickiness out. Remove the real hinge attachment.
~With hot glue, set your metal hinge in place one part at a time. I filled up the space below the hinge with the hot glue until it was about to over flow, and then I set the hinge on top. Try to make it so that a little glue seeps up through the screw holes in the hinge. This will help to hold it in place. 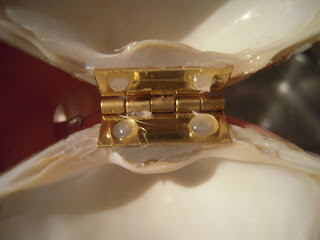 This is not a very pretty picture, but it gives you the idea. I cleaned up the whole thing afterward.
~Mod podge the heck out of that quahog. Inside and outside. I used several applications. Make 'er shine.
~ I opted to paint my hinge an off white.... the brass just didn't work for me.
~Find a nice smooth rock and put a big glob of hot glue on the top where the shell will sit (test out how it will all balance first and mark where the shell will sit). Set a small circle (about the same size as the glue dollop) of burlap on top of that to give it some extra grip and put another blob of hot glue on top of that. Set the shell on top and push it firmly down. Let it cool.
~Fill it with whatever you'd like to fill it with. Ornate soaps, earrings, fancy dog treats, q-tips?? I could go on. 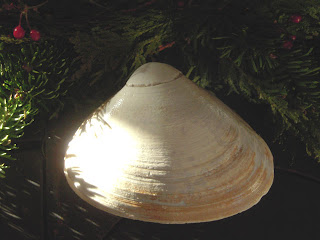 I shared this post at some very funky parties:
Frugalicious Friday
Three Or More Tuesdays
Works For me Wednesdays