(Don't forget to link up to my Marvelous Mess party......I'll be picking one project to feature on my sidebar for a week!! )
“When made in small quantities—that is, quickly from the first run of sap and properly treated—it has a wild delicacy of flavor that no other sweet can match. What you smell in freshly cut maple-wood, or taste in the blossom of the tree, is in it. It is then, indeed, the distilled essence of the tree.”
John Burroughs, Signs and Seasons, 1886 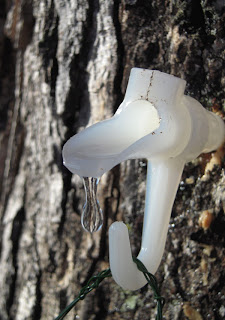 It is that time of year in New England. Time to make some Maple Syrup!!
Maple sugaring was discovered by the Eastern Woodland Indians. An Old Iroquois legend tells us the accidental discovery of the maple sugar making process:
A hunter returned to his dwelling and found an enticing sweetness in the air around the kettle in which his mate was boiling meat. The fluid in the kettle, he learned, was sap and had been collected beneath a broken maple limb. (Quoted from Maple Museum)
The Native Americans would begin by cutting the tree and collecting the sap in a hollowed out log, adding hot stones to it to boil the sap until it became crystallized sugar, which was easy for storing. Colonists would add to their techniques by tapping the trees with wooden or metal spouts, collecting them in buckets which they then boiled over a big pot. The success of sugaring was great, in fact it enabled the colonists to completely end their dependence on foreign sugar.
“A sap-run is the sweet good-by of winter. It is the fruit of the equal marriage of the sun and frost.”
John Burroughs, Signs and Seasons, 1886
I am an amateur at sugaring. I've never worked at a farm which produces a lot of syrup, at the most I have tapped 8 trees at a time. You won't believe what kind of results you can get from EIGHT trees!! This year I tapped two trees, with two taps each in them. Here's how you do it:
*Tap your trees when it gets below freezing at night and above freezing during the day in the early spring.
*Buy some Taps and something to catch the sap in. You can buy the fancy metal buckets, but they cost a lot and we just didn't want to shell out the cash. I found some food grade plastic pitchers for cheap and then used some metal bowls I had in the house. Drill a hole in the tree on the south facing side. I jerryrigged the containers to either sit beneath the tap or be attached to the tap by some wire: 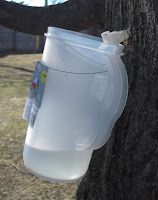 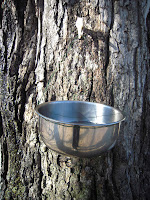 *Collect the sap every day (sometimes twice a day) and boil it down (preferably on an outside stove or in your house with the windows open) until it gets to the consistency of maple syrup. 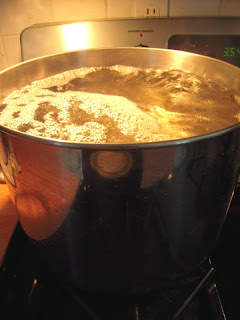 Don't go overboard unless you want maple candy or even worse: 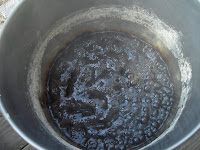 Now that is some overcooked sap. Don't let it get to that point. :-)
The ratio of sap-syrup in high.....about 40 gallons of Sap are needed for 1 gallon of syrup. I am betting we get about 1 gallon from our taps this year. There is nothing like the taste of fresh maple syrup.....don't even think about picking up that Aunt Jemima. 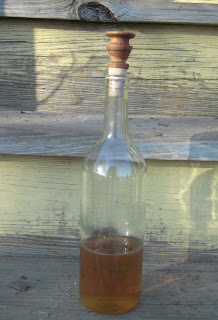 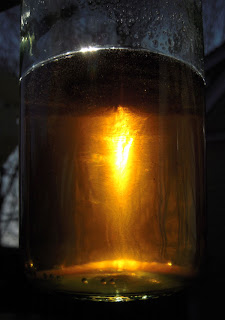 I am linking this post up to these fantastic parties:
Show and Tell @ Blue Cricket Design
Frugalicious Friday
Get Your Craft On
Show and Tell
Works For Me Wednesday